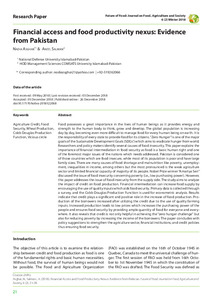 Food possesses a great importance in the lives of human beings as it provides energy and strength to the human body to think, grow and develop. The global population is increasing day by day, becoming even more difficult to manage food for every human being on earth. It is the responsibility of every state to provide food for its citizens. “Zero Hunger” is one of the major goals of the Sustainable Development Goals (SDGs’) which aims to eradicate hunger from world. Several causes of food insecurity are identified by researchers and policy makers. This paper explains the importance of financial intermediation in food security as food is a basic human right and one of the foremost major issues of the nations which needs addressed. Pakistan is considered one of those countries which are food insecure, while most of its population is poor and have large family sizes. There are many causes of food shortage and malnutrition like poverty, unemployment, inequalities in income, among others but the most pronounced is the weak agriculture sector and limited financial capacity of majority of its people. Nobel Prize winner “Amartya Sen” discussed the issue of food insecurity with respect to poverty (i.e. low purchasing power), however, this paper addresses the issue of food insecurity from the supply side. The aim of the study is to analyze the impact of credit on food production. Financial intermediation can increase food supply by encouraging the use of quality inputs which aids food security. Primary data is collected through a survey, and the Cobb Douglas Production Function is used for econometric analysis. Results indicate that the credit plays a significant and positive role in the increase of food production. Production of the borrowers increased after utilizing the credit due to the use of quality farming inputs. Increased production leads to low prices which increases the purchasing power of the people and ensures food security by providing ample quantity of food for everyone and everywhere. It also reveals that credit is not only helpful in achieving the “zero hunger challenge but also for reducing poverty by increasing the income of the borrowers. The paper concludes with policy suggestions to strengthen the agriculture sector, financial institutions and credit policies thus ensuring food security.