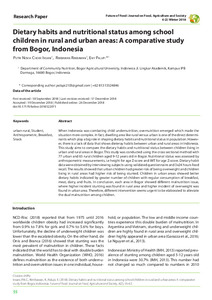 Dietary habits and nutritional status among school children in rural and urban areas: A comparative study from Bogor, Indonesia

When Indonesia was combating child undernutrition, overnutrition emerged which made the situation more complex. In fact, dwelling area like rural versus urban is one of the direct determi- nants which play a big role in shaping dietary habits and nutritional status in population. However, there is a lack of data that shows dieteray habits between urban and rural areas in Indonesia. This study aims to compare the dietary habits and nutritional status between children living in urban and rural areas in Bogor. This study was conducted using the cross sectional method with 77 urban and 65 rural children aged 9-12 years old in Bogor. Nutritional status was assessed by anthropometric measurements, i.e height for age Z-score and IMT for age Z-score. Dietary habit data were obtained by interviewing subjects using validated questionnaire and 3x24 hours food recall. The results showed that urban children had greater risk of being overweight and children living in rural areas had higher risk of being stunted. Children in urban areas showed better dietary habits indicated by greater number of children with regular consumption of breakfast, meat, dairy, and fruits. In conclusion, each area in Bogor showed different malnutrition issue, where higher incident stunting was found in rural area and higher incident of overweight was found in urban area. Therefore, different intervention seems urgent to be elaborated to alleviate the dual malnutrition among children.