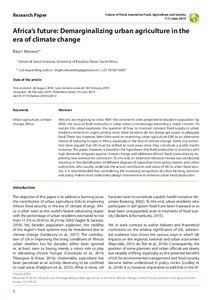 Africans are migrating to cities. With the continent’s cities projected to double in population by 2050, the issue of food insecurity in urban areas is increasingly becoming a major concern. To sustain this urban explosion, the question of how to maintain constant food supply to urban residents remains an urgent priority since these locations do not always get access to adequate food. There has, however, been little work on examining urban agriculture (UA) as an alternative means of reducing hunger in Africa, especially in the face of climate change. Some city authorities have argued that UA must be shifted to rural areas since they constitute a public health nuisance. The paper, however, is based on the hypothesis that food production in locations with high demands mitigates against climate change and addresses Africa’s food insecurities by exploiting new avenues for cultivation. To this end, an extensive literature review was conducted, resulting in the identification of different degrees of opposition from policy-makers and urban authorities, who usually underrate the actual contribution and value of UA to urban food security. It is recommended that considering the increasing recognition of urban farming, planners and policymakers must collectively design interventions to enhance urban food production.