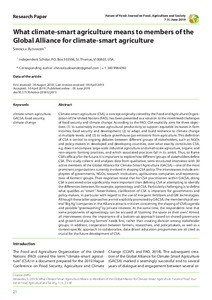 Climate-smart agriculture (CSA) is a recently proposed solution to address increasing concerns about food scarcity caused by climate change. The UN Food and Agriculture Organization defines CSA as an increase in agricultural productivity while adapting and building resilience to climate change and reducing greenhouse gas emissions, where possible. However, this definition of CSA and relevant methods are central to a debate between different groups of stakeholders, such as NGOs, policy-makers in developed and developing countries, large-scale industrial agriculture and organic small-scale agriculture. Thus, in framing CSA’s efficacy for the future, it is important to explore how different groups of stakeholders define CSA and understand its methods. This study collects and analyzes data from qualitative, semi-structured interviews with 30 active members of the Global Alliance for Climate-Smart Agriculture (GACSA)—one of the most prominent organizations currently involved in shaping CSA policy—including governments, NGOs, research institutions, farmers’ groups, and agribusiness companies. Their responses reveal that while it is challenging to define what qualifies as “smart,” for CSA practitioners within GACSA, doing CSA is perceived to be significantly more important than defining CSA or attempting to identify the differences between agroecology and CSA. Nevertheless, clarification of CSA is important for governments and policy-makers. In particular, with regard to the use of inorganic fertilizers and GM technologies, the respondents stated that although these approaches are not explicitly promoted by GACSA, several “Big Ag” companies hold membership in the Alliance, attracting criticism concerning private interests shaping CSA agenda and possible “greenwashing.” At the same time, they noted that some proponents of agroecology can be accused of “claiming the space as all their own.” Almost all interviewees stressed the importance of a bottom-up approach based on shared governance and growth and placing farmers’ needs first, rather than creating division among stakeholder groups. In addition, cooperation between farmers, researchers, and policymakers, as well as a context-specific approach to collaborative, data-driven education programs are crucial for the development of CSA.