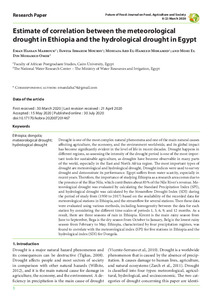 Drought is one of the most complex natural phenomena and one of the main natural causes affecting agriculture, the economy, and the environment worldwide, and its global impact has become significantly evident in the level of life in recent decades. Drought happens in different regions, so assessing the intensity of the drought period is one of the most important tools for sustainable agriculture, as droughts have become observable in many parts of the world, especially in the East and North Africa region. The most important types of drought are meteorological and hydrological drought, Drought indices were used to survey drought and demonstrate its performance. Egypt suffers from water scarcity, especially in recent years. Therefore, the importance of studying Ethiopia as a research area comes due to the presence of the Blue Nile, which contributes about 85% of the Nile River's revenue. Meteorological drought was evaluated by calculating the Standard Precipitation Index (SPI), and hydrological drought was calculated by the Streamflow Drought Index (SDI) during the period of study from (1950 to 2017) based on the availability of the recorded data for meteorological stations in Ethiopia, and the streamflow for several stations. Then these data were evaluated using various methods, including homogeneity between the data for each station by considering the different time scales of periods 1, 3, 6, 9, and 12 months. As a result, there are three seasons of rain in Ethiopia. Kiremt is the main rainy season from June to September, Bega is the dry season from October to January, Belg is the lowest rainy season from February to May. Ethiopia, characterized by four precipitation regimes, was found to correlate with the meteorological index (SPI) for five stations in Ethiopia and the hydrological index (SDI) for Dongola.