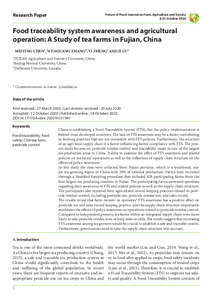 China is establishing a Food Traceability System (FTS), but the policy implementation is behind most developed countries. The lack of FTS awareness may be a factor contributing to farming practices that are not consistent with FTS policies. Furthermore, the structure of an agri-food supply chain is a factor influencing farms’ compliance with FTS. The present study focuses on pesticide residue control and traceability issues in one of the largest tea production areas in China. It aims to examine the effect of FTS awareness and related policies on tea farms’ operations as well as the influences of supply chain structure on the effects of policy awareness.
In this study the data were collected from Fujian province, which is a traditional, major tea-growing region in China with 18% of national production. Farms were recruited through a Stratified Sampling procedure that included 428 participating farms from the four largest tea-producing counties in Fujian. The participating farms answered questions regarding their awareness of FTS and related policies as well as the supply chain structure. The participants also reported their agricultural record-keeping practices related to pesticide residue control, including pesticide use, pesticide residue test, and sales record.
The results reveal that farm owners’ or operators’ FTS awareness has a positive effect on pesticide use and sales record-keeping practice, and the supply chain structure importantly moderates the effects of policy awareness on operations related to pesticide residue control. Compared to independent growers, tea farms within an integrated supply chain were more likely to take pesticide residue tests or keep sales records. The results suggest that increasing FTS awareness among tea growers would be crucial to establish a safe and traceable system. Furthermore, governments need to take the supply chain structure into account.