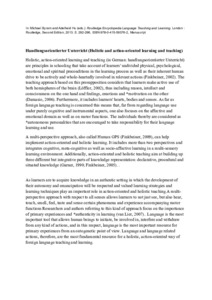 Holistic, action-oriented learning and teaching (in German: handlungsorientierter Unterricht) are principles in schooling that take account of learners' undivided physical, psychological, emotional and spiritual preconditions in the learning process as well as their inherent human drive to be actively and whole-heartedly involved in relevant actions (Finkbeiner, 2002). The teaching approach based on this presupposition considers that learners make active use of both hemispheres of the brain (Löffler, 2002), thus including reason, intellect and consciousness on the one hand and feelings, emotions and *motivation on the other (Damasio, 2006). Furthermore, it includes learners' hearts, bodies and senses. As far as foreign language teaching is concerned this means that, far from regarding language use under purely cognitive and instrumental aspects, one also focuses on the affective and emotional domain as well as on motor functions. The individuals thereby are considered as *autonomous personalities that are encouraged to take responsibility for their language learning and use.
It has to be mentioned that, despite the relevance of handlungsorientierter Unterricht, a universally valid theory and definition of action does still not exist. That might be due to the fact that, so far, there are only very few empirical studies in the field. A further difficulty lies in the fact that the term 'action' is often used in a very colloquial and unreflected sense. To avoid misunderstandings: holistic, action-oriented learning and teaching -handlungsorientierter Unterricht - are not compatible with a reductionist teaching of factual and theoretical knowledge in school. Rather, this approach seeks to develop a well balanced and dialectic relationship of theory and practice as well as of reflection and production. Yet, the relationship of the scientific theoretical content and the orientation towards action and holism must be further elaborated, especially in consideration of the different school types and levels.

This is an Accepted Manuscript of a book chapter published by Routledge in "Routledge encyclopedia of language teaching and learning" in 2013. Available online: https://www.routledge.com/Routledge-Encyclopedia-of-Language-Teaching-and-Learning/Byram-Hu/p/book/9781138709805