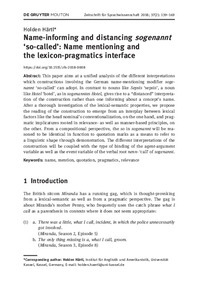 This paper aims at a unified analysis of the different interpretations which constructions involving the German name-mentioning modifier soge-nannt‘so-called’ can adopt. In contrast to nouns like Sepsis‘sepsis’, a noun like Hotel ‘hotel’, as insogenanntes Hotel, gives rise to a “distanced” interpretation of the construction rather than one informing about a concept’s name. After a thorough investigation of the lexical-semantic properties, we propose the reading of the construction to emerge from an interplay between lexicalfactors like the head nominal’s conventionalization, on the one hand, and pragmatic implicatures rooted in relevance- as well as manner-based principles, onthe other. From a compositional perspective, the so in sogenannt will be reasoned to be identical in function to quotation marks as a means to refer to a linguistic shape through demonstration. The different interpretations of the construction will be coupled with the type of binding of the agent-argument variable as well as the event variable of the verbal root nenn- ‘call’ of sogenannt.