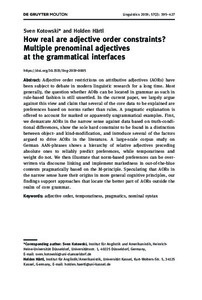 How real are adjective order constraints? Multiple prenominal adjectives at the grammatical interfaces

Adjective order restrictions on attributive adjectives (AORs) have been subject to debate in modern linguistic research for a long time. Most generally, the question whether AORs can be located in grammar as such in rule-based fashion is still unsettled. In the current paper, we largely argue against this view and claim that several of the core data to be explained are preferences based on norms rather than rules. A pragmatic explanation is offered to account for marked or apparently ungrammatical examples. First, we demarcate AORs in the narrow sense against data based on truth-conditional differences, show the sole hard constraint to be found in a distinction between object- and kind-modification, and introduce several of the factors argued to drive AORs in the literature. A large-scale corpus study on German AAN-phrases shows a hierarchy of relative adjectives preceding absolute ones to reliably predict preferences, while temporariness and weight do not. We then illustrate that norm-based preferences can be overwritten via discourse linking and implement markedness in out-of-the-blue contexts pragmatically based on the M-principle. Speculating that AORs in the narrow sense have their origins in more general cognitive principles, our findings support approaches that locate the better part of AORs outside the realm of core grammar.