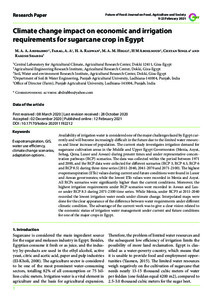 Availability of irrigation water is considered one of the major challenges faced by Egypt during current time and will be more difficult in the future with the limited water resources and linearly increase of population. The current study investigates irrigation demand for sugarcane cultivation areas in the Middle and Upper Egypt Governorates (Menia, Asyut, Sohag, Qena, Luxor and Aswan) during current time and under RCPs scenarios. The current data was collected from 1971 till 2000. The RCP data were collected for different scenarios (RCP 3, RCP 4.5, RCP 6 and RCP 8.5) during three time series (2011-2040, 2041-2070 and 2071-2100). The highest evapotranspiration values during current and future conditions was found in Luxor and Aswan governorates; while the lowest evapotranspiration values were recorded in Menia and Asyut. All RCPs scenarios were significantly higher than current conditions. Moreover, the highest irrigation requirements under RCP scenarios were recorded in Aswan and Luxor under RCP 8.5 during 2071-2100 time series. While the lowest irrigation requirement under climate change were found in Menia under RCP3 during 2011-2040 time series. Irrigation requirement for sugarcane under current and future condition was demonstrated by interpolated maps.