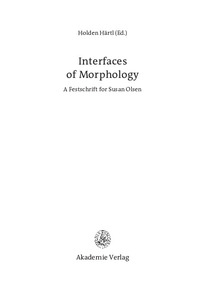 The current paper investigates these cases from a lexicalist perspective. In particular, I will discuss whether realizations of arguments of non-heads of the above types are based on a regular grammatical process or not. I will argue that this is the case indeed with constructions of the type Designanalyse des Geschirrs, where the post-nominal element figures as argument of both the head as well as the non-head. In contrast, (prepositional) external argument realizations of the type in (1)—i.e. constructions in which the post-nominal element satisfies an argument slot of the non-head predicate alone—will be approached from a non-grammatical, pragmatically oriented perspective.
In the second part of the paper, I will take a closer look upon verb-noun compounds like Fahrgemeinschaft in (1)a, Sägewerk (sawmill) etc. I will claim that the argument variables of the verbal non-heads are nevertheless lexically still active after the word-formation process, that is, in some way “inherited” to the compound. At this point it is vital to note that my assumptions do not necessarily imply a syntactic feature percolation operation (as proposed by, e.g., Harley 2008). Rather, I will assume a (lexical-semantic) operation of function composition to be at work in constructions like Designanalyse des Geschirrs. Furthermore, based on insights from PRO-configurations as well as sentential complements, I will implement a lexical-structural projection below the word level, under the assumption of two separate grammatical domains, i.e., syntax and morphology, which share a common generative structure building apparatus.