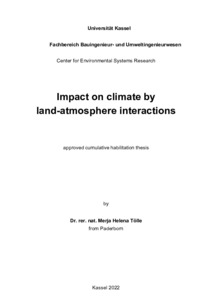 Impact on climate by land-atmosphere interactions

This synthesis of the cumulative habilitation explores the uncertainties of the impact of land-atmosphere interactions due to land use and cover change (LUCC) on the regional and local climate. The results are published in several papers of climate, environmental and atmospheric journals. Efficient emission reduction policies are needed in order to reduce the increase in the rate of climate change intensification with increasing greenhouse gas emissions. This requires the development of mitigation and adaptation strategies for a sustainable use of the resources. According to the IPCC a key role is played by land use ransformations to adapt and mitigate climate change for future scenarios aiming to stabilize temperature rise up to 1.5 °C. LUCC impacts land surface processes, which determine the turbulent and radiative fluxes between the land and atmosphere. These modifications affect atmospheric temperature and humidity and thus the planetary boundary layer structure, and cloud processes. Essential for mitigation and adaptation strategies is a sufficient characterization of associated uncertainties due to LUCC in climate models. After an introductory overview, the conceptual basis of the processes within the regional climate model is presented. Then three objectives are addressed from a LUCC perspective. The discussion contains the uncertainties due to bias correction and model spatial horizontal resolution on climate metrics, due to LUCC in climate simulations, and due to the combined effect of LUCC and spatial resolution of the climate model. Uncertainties associated with climate change projections are inherent and increase towards the end of the century. A large ensemble of bias-corrected and uncorrected regional climate model simulations are used to exemplify future changes to the hydrological cycle by means of the Standard Precipitation Index (SPI) over Germany. The sensitivity of the SPI to modeled precipitation bias is small. These findings highlight the SPI as a resilient index for climate change studies, avoiding additional uncertainties caused by bias corrections. This index allows for the formalization of possible consequences for the vegetation during the growing season involving land management planning. Therefore, the choice of certain indices for specific problems would allow more reliable climate model results in a user-friendly way without the use of bias correction methods. The configuration of the model and the coherent capability of the model to represent processes explicitly depend on the horizontal resolution. Regional climate model simulations at the convection-permitting scale reduce the biases of global models and coarser horizontal resolution regional climate models. It has been shown that precipitation extremes tend to increase and show more spatial variability with increasing horizontal resolution in the model. Most of the improvements result from resolving deep convection, which results in an improvement to the afternoon precipitation peak due to convective clouds. A change in the surface energy balance and land-atmosphere feedbacks is associated with this improvement, which results in reduced summer warming (in its mean and extremes). Thus, convection-permitting simulations add value beyond the improved representation of the orography due to the increased horizontal resolution. Therefore, future directions should emphasize the convection-permitting scale in their initiatives (e.g. use in impact models). A deforestation study in Southeast Asia showed large-scale deforestation may persistently change the climate of that region and the impact is greater than natural variability alone. Another deforestation experiment over Europe demonstrates that the summer due to the conversion to grassland can be more than 3 °C warmer. There is an inter-model disagreement in the 2 m temperature response due to de/af-forestation in mid-latitudes in summer. Different parameterizations in the land surface scheme of the regional climate models may explain this discrepancy. A sensitivity study with different albedo arameterizations in the regional climate model demonstrates that the model uncertainties due to the parameterization are higher than the potential impact of land cover change. Appropriate weather predictions and climate projections rely on accurate calculations of the underlying processes. Inclusion of reliable parameterizations in the models is necessary combined with validation and evaluation with the observational network. A case study of increasing bioenergy crops over Germany shows that the local effect on a small spatial scale is much more pronounced than the regional effect. This results due the fact that the physical mechanisms differ strongly on local and regional scale. Furthermore, the effect of irrigation has the potential to reduce temperature extremes important for land management. LUCCs at convection-permitting scales allow drawing conclusions on such scales and need a coordinated effort. This habilitation showed what impact researchers and stakeholder can expect from LUCC and convection-permitting climate simulations, and that impact-relevant information can be derived from convection-permitting climate simulations. The future scientific goal should emphasize a more holistic approach for atmosphere and land model development of Earth system models. Here, an extension of collaboration with the social and cultural sciences would be an essential step forward to transfer the natural science knowledge to the public community for climate sustainability. In the medium term, the strengthening of scientific elaboration should consist of fundamental research, applied research and evaluation. The establishment of more competence centers with partner companies from business and administration could be a successful goal. The centers could be based on the concept that has been implemented for many years at the University of Kassel, which is the Center for Environmental Systems Research. It offers participating partner companies a neutral platform for cooperative research. Together with the partner companies a research plan tailored to their needs could be agreed upon, which would be characterized by a high level of application orientation. Bilateral cooperation with politics, companies and planning offices would support the research work. This enables the development of mitigation and adaptation strategies for using the resources in a sustainable way.

This is a cumulative work consisting out of a synthesis of 14 publications.
Deutscher Titel: Auswirkungen auf das Klima durch Land-Atmosphäre-Wechselwirkungen