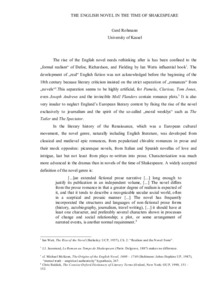 The English novel in the time of Shakespeare

The rise of the English novel needs rethinking after it has been confined to the "formal realism" of Defoe, Richardson, and Fielding (Watt, 1957), to "antecedents, forerunners" (Schlauch, 1968; Klein, 1970) or to mere "prose fiction" (McKillop, 1951; Davis, Richetti, 1969; Fish, 1971; Salzman, 1985; Kroll, 1998). My paper updates a book by Jusserand under the same title (1890) by proving that the social and moral history of the long prose genre admits no strict separation of "novel" and "romance", as both concepts are intertwined in most fiction (Cuddon, Preston, 1999; Mayer, 2000). The rise of the novel, seen in its European context, mainly in France and Spain (Kirsch, 1986), and equally in England, was due to the melting of the nobility and high bourgeoisie into a "meritocracy", or to its failure, to become the new bearer of the national culture, around 1600. (Brink, 1998). My paper will concentrate on Euphues (1578), a negative romance, Euphues and His England (1580), a novel of manners, both by Lyly; Arcadia (1590-93) by Sidney, a political roman à clef in the disguise of a Greek pastoral romance; The Unfortunate Traveller (1594) by Nashe, the first English picaresque novel, and on Jack of Newbury (1596-97) by Deloney, the first English bourgeois novel. My analysis of the central values in these novels will prove a transition from the aristocratic cardinal virtues of WISDOM, JUSTICE, COURAGE, and HONOUR to the bourgeois values of CLEVERNESS, FAIR PLAY, INDUSTRY, and VIRGINITY. A similar change took place from the Christian virtues of LOVE, FAITH, HOPE to business values like SERVICE, TRUST, and OPTIMISM. Thus, the legacy of history proves that the main concepts of the novel of manners, of political romance, of picaresque and middle-class fiction were all developed in the time of Shakespeare.