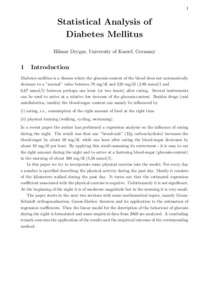 Diabetes mellitus is a disease where the glucosis-content of the blood does not automatically
decrease to a ”normal” value between 70 mg/dl and 120 mg/dl (3,89 mmol/l and
6,67 mmol/l) between perhaps one hour (or two hours) after eating. Several instruments
can be used to arrive at a relative low increase of the glucosis-content. Besides drugs (oral
antidiabetica, insulin) the blood-sugar content can mainly be influenced by
(i) eating, i.e., consumption of the right amount of food at the right time
(ii) physical training (walking, cycling, swimming).
In a recent paper the author has performed a regression analysis on the influence of eating
during the night. The result was that one ”bread-unit” (12g carbon-hydrats) increases the
blood-sugar by about 50 mg/dl, while one hour after eating the blood-sugar decreases by
about 10 mg/dl per hour. By applying this result-assuming its correctness - it is easy to eat
the right amount during the night and to arrive at a fastening blood-sugar (glucosis-content)
in the morning of about 100 mg/dl (5,56 mmol/l).
In this paper we try to incorporate some physical exercise into the model.