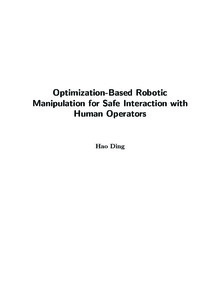 This thesis investigates a method for human-robot interaction (HRI) in order to uphold productivity of industrial robots like minimization of the shortest operation time, while ensuring human safety like collision avoidance. For solving such problems an online motion planning approach for robotic manipulators with HRI has been proposed. The approach is based on model predictive control (MPC) with embedded mixed integer programming.
The planning strategies of the robotic manipulators mainly considered in the thesis are directly performed in the workspace for easy obstacle representation. The non-convex
optimization problem is approximated by a mixed-integer program (MIP). It is further
effectively reformulated such that the number of binary variables and the number of feasible integer solutions are drastically decreased.
Safety-relevant regions, which are potentially occupied by the human operators, can be generated online by a proposed method based on hidden Markov models. In contrast to
previous approaches, which derive predictions based on probability density functions in the form of single points, such as most likely or expected human positions, the proposed method computes safety-relevant subsets of the workspace as a region which is possibly occupied by the human at future instances of time. The method is further enhanced by combining reachability analysis to increase the prediction accuracy. These safety-relevant regions can subsequently serve as safety constraints when the motion is planned by optimization. This way one arrives at motion plans that are safe, i.e. plans that avoid collision with a probability not less than a predefined threshold.
The developed methods have been successfully applied to a developed demonstrator,
where an industrial robot works in the same space as a human operator. The task of the
industrial robot is to drive its end-effector according to a nominal sequence of grippingmotion-releasing operations while no collision with a human arm occurs.