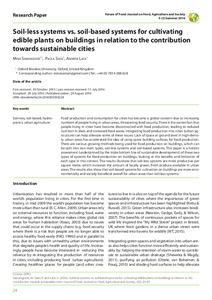 Soil-less systems vs. soil-based systems for cultivating edible plants on buildings in relation to the contribution towards sustainable cities

Food production and consumption for cities has become a global concern due to increasing numbers of people living in urban areas, threatening food security. There is the contention that people living in cities have become disconnected with food production, leading to reduced nutrition in diets and increased food waste. Integrating food production into cities (urban agriculture) can help alleviate some of these issues. Lack of space at ground level in high-density urban areas has accelerated the idea of using spare building surfaces for food production. There are various growing methods being used for food production on buildings, which can be split into two main types, soil-less systems and soil-based systems. This paper is a holistic assessment (underpinned by the triple bottom line of sustainable development) of these two types of systems for food production on buildings, looking at the benefits and limitation of each type in this context. The results illustrate that soil-less systems are more productive per square metre, which increases the amount of locally grown, fresh produce available in urban areas. The results also show that soil-based systems for cultivation on buildings are more environmentally and socially beneficial overall for urban areas than soil-less systems.