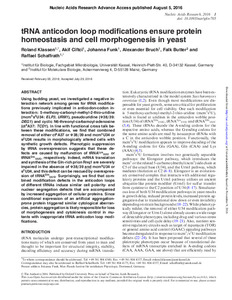 Using budding yeast, we investigated a negative interaction network among genes for tRNA modifications previously implicated in anticodon-codon interaction: 5-methoxy-carbonyl-methyl-2-thio-uridine (mcm5s2U34: ELP3, URM1), pseudouridine (Ψ38/39: DEG1) and cyclic N6-threonyl-carbamoyl-adenosine (ct6A37: TCD1). In line with functional cross talk between these modifications, we find that combined removal of either ct6A37 or Ψ38/39 and mcm5U34 or s2U34 results in morphologically altered cells with synthetic growth defects. Phenotypic suppression by tRNA overexpression suggests that these defects are caused by malfunction of tRNALysUUU or tRNAGlnUUG, respectively. Indeed, mRNA translation and synthesis of the Gln-rich prion Rnq1 are severely impaired in the absence of Ψ38/39 and mcm5U34 or s2U34, and this defect can be rescued by overexpression of tRNAGlnUUG. Surprisingly, we find that combined modification defects in the anticodon loops of different tRNAs induce similar cell polarity- and nuclear segregation defects that are accompanied by increased aggregation of cellular proteins. Since conditional expression of an artificial aggregation-prone protein triggered similar cytological aberrancies, protein aggregation is likely responsible for loss of morphogenesis and cytokinesis control in mutants with inappropriate tRNA anticodon loop modifications.