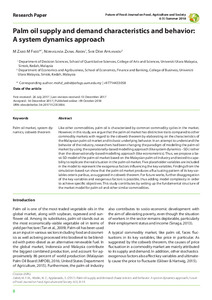 Like other commodities, palm oil is characterized by common commodity cycles in the market. However, in this study, we argue that the palm oil market has distinctive traits compared to other commodity markets with regard to the cobweb theorem by elaborating on the characteristics of the Malaysian palm oil market and its basic underlying behavior. In an attempt to understand the behavior of the industry, researchers had been changing the paradigm of modelling the palm oil market by using the operationally-based modelling approach (like system dynamics - SD-) rather than the observationally-based modelling approach (like econometrics). Thus, we propose a basic SD model of the palm oil market based on the Malaysian palm oil industry and tested its capability to replicate the real situation in the palm oil market. Five placeholder variables are included in the model to represent the exogenous factors influencing the key variables. Findings from the simulation-based run show that the palm oil market produces a fluctuating pattern of its key variables ceteris paribus, as suggested in cobweb theorem. For future works, further disaggregation of the key variables and exogenous factors is possible, thus adding model complexity in order to achieve specific objectives. This study contributes by setting up the fundamental structure of the market model for palm oil and other similar commodities.

In: Future of Food: Journal on Food, Agriculture and Society. Witzenhausen : University of Kassel, Specialized Partnerships in Sustainable Food Systems and Food Sovereignty. - Vol. 6, No. 1 (2018), S. 8-19