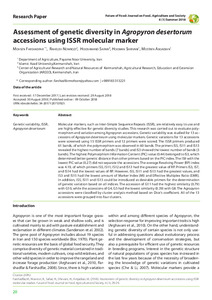 Molecular markers, such as Inter-Simple Sequence Repeats (ISSR), are relatively easy to use and are highly effective for genetic diversity studies. This research was carried out to evaluate polymorphism and variation among Agropyron accessions. Genetic variability was studied for 13 accessions of Agropyron desertorum using molecular markers. Genetic variations for 13 accessions were screened using 15 ISSR primers and 12 primers were scored. The ISSR primers produced 61 bands, of which the polymorphism was observed in 60 bands. The primers IS5, IS11 and IS13 revealed the highest number of bands (7 bands) and IS3 showed the lowest number of bands (3 bands). The highest Polymorphism Information Content (PIC) value (0.44) belonged to IS3, which determined better genetic distance than other primers based on the PIC index. The IS9 with the lowest PIC value (0.27) did not separate the accessions. The average Resolving Power (RP) index was 4.19, of which primers IS5, IS11, IS12 and IS13 had the greatest value of RP. Primers IS3, IS7, and IS14 had the lowest values of RP. However, IS5, IS11 and IS13 had the greatest values, and IS3 and IS15 had the lowest amount of Marker Index (MI) and Effective Multiplex Ratio (EMR). In addition, IS5, IS11 and IS13 could be introduced as desirable primers for the determination of genetic variation based on all indices. The accession of G11 had the highest similarity (0.79) with G10, while the accessions of G4, G5 had the lowest similarity (0.39) with G8. The Agropyron accessions were classified by cluster analysis method based on Dice's coefficient. All of the 13 accessions were grouped into four clusters.

In: Future of Food: Journal on Food, Agriculture and Society. Witzenhausen : University of Kassel, Specialized Partnerships in Sustainable Food Systems and Food Sovereignty. - Vol. 6, No. 1 (2018), S. 20-29