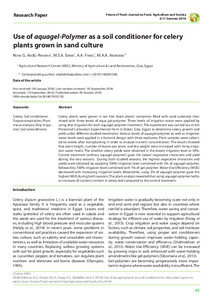 Celery plants were grown in ten liter black plastic containers filled with sand substrate then mixed with three levels of aqua gel-polymer. Three levels of irrigation water were applied by using drip irrigation for each aquagel-polymer treatment. The experiment was carried out at the Protected Cultivation Experimental Farm in Dokki, Giza, Egypt to determine celery growth and yield under different studied treatments. Various levels of aquagel-polymer as well as irrigation water levels were applied in a factorial design with three replicates. Plant samples were collected six weeks after transplanting in order to analyze nutrient concentration. The results showed that plant height, number of leaves per plant, and dry weight were increased with rising irrigation water levels. The smallest celery yields were obtained in the lowest irrigation level at 50%. Control treatment (without aquagel-polymer) gave the lowest vegetative characters and yield during the two seasons. During both studied seasons, the highest vegetative characters and yields were obtained by applying 100% irrigation level combined with 2% of aquagel-polymer, followed by 100% irrigation level combined with 1% of gel-polymer. Water Use Efficiency (WUE) decreased with increasing irrigation levels. Meanwhile, using 2% of aquagel-polymer gave the highest WUE during both seasons. The plant analysis revealed that using aquagel-polymer led to an increase of nutrient content in celery leaf compared to the control treatment.

In: Future of Food: Journal on Food, Agriculture and Society. Witzenhausen : University of Kassel, Specialized Partnerships in Sustainable Food Systems and Food Sovereignty. - Vol. 6, No. 1 (2018), S. 85-94