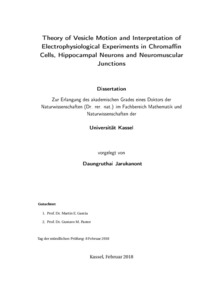 Communication among secretory cells, neurons and other related cells is accompanied by a
process called exocytosis, which consists in the release of neurotransmitters into the intercellular space. The neurotransmitter molecules are transported inside vesicles, which move
towards the cell membrane. Once at an active site of the membrane, vesicles can undergo
fusion with the membrane. As a result of fusion, a pore in the membrane is produced, through
which neurotransmitter molecules leave the cell. Exocytosis is a complex multi-step process
that includes vesicle trafficking, docking, priming and fusion. Although all these steps have
been intensively studied, some aspects of their mechanisms, particularly those regarding
vesicle transport to the active sites situated at the membrane, are still unclear. In this work,we have developed a model for the transport of synaptic and secretory vesicles and have
constructed a general theory which relates vesicle dynamics towards the membrane to electrophysiological experiments. We applied the theory to Chromaffin cells, Hippocampal neurons
and neuromuscular junctions. The development of the general theory is a result of some steps,
that are described in the different chapters of this dissertation, and are briefly sketched below. First, we showed that it is possible to extract information on vesicle motion in Chromaffin cells from electrophysiological experiments. We came to this conclusion by comparing the result of Langevin simulations with amperometric measurements during sustained (steady-state) exocytosis. In particular, we performed Langevin simulations of vesicle motion towards the cell membrane assuming pure Brownian motion and obtained the statistics of vesicle arrival times. As expected, the arrival-time statistics was determined by a Poisson process. On the other hand, we carried out a detailed statistical analysis of exocytosis events taken from amperometric data obtained by a collaboration partner (Dr. Imelda Bonifas, IPICyT, Mexico). We realized that, in the steady state, each amperometric peak can be related to a single release from a new vesicle arriving at the active site of the cell membrane and that the amperometric signal can be mapped into a time-sequence of release events. We normalized the release-sequences resulting from the current peaks using a time-rescaling transformation, thus making signals coming from different cells comparable. We observed that the release statistics of the mentioned amperometric experiments considerably deviates from a Poisson process. Moreover, we found that the inter-release-time probability is reasonably well described by two-parameter gamma distributions, thus indicating that the motion of vesicles cannot be purely diffusive (which would correspond to a Poisson distribution). In order to determine how the ensemble of vesicles move we repeated the Langevin simulations but assuming, that, in addition to the Brownian motion, all vesicles are guided towards the membrane by an attractive harmonic potential. Remarkably, the arrival-time statistics followed a gamma distribution. Therefore, we could conclude that the motion of the ensemble of vesicles is not purely diffusive, but rather biased towards the membrane, as suggested by previous experimental imaging studies performed on single vesicles that vesicles’ motion underneath plasma membranes. We have also shown that inclusion of the fusion-time statistics in our model does not produce any significant changes on the results. The results of the above described analysis was published in the Journal PlosOne together with the amperometric recordings taken by our collaborators from Mexico. Encouraged by the successful analysis on Chromaffin cells we decided to study and simulate miniature excitatory postsynaptic currents (mEPSC) and miniature excitatory junction potentials (mEJP), based on the results of patch-clamp experiments performed by collaboration partners at the University of Heidelberg (Dr. Peter Bengtson and Prof. Dr. Christoph Schuster). The existence of mEPSC and mEJP was discovered long time ago, but their origin and relevance are still unknown. In the last years, different groups have started to look at both mEPSC and mEJP in more detail. In the patch-clamp experiments performed in Heidelberg, the spontaneous (postsynaptic-current shaped) variations of the potential on postsynaptic neurons or muscle cells due to the presence of neurotransmitters released by neighboring neurons were measured. Whereas usual postsynaptic currents are generated by action-potential-dependent and their dependent releases of neurotransmitter are characterized by bursts of postsynaptic
current, miniature postsynaptic currents are currents observed in the absence of presynaptic
action potentials, and exhibit single events. This means that mEPSC and mEJP are a measure
of the release of neurotransmitter by single vesicles on to one without previous stimulus. The
mEPCS data provided by Dr. Bengtson was obtained from mice Hippocampal neurons and the
mEJP signals provided by Prof. Dr. Schuster were measured on neuromuscular junctions of
Drosophila larvae. Our statistical analysis of many sets of data of both collaboration partners
showed that spontaneous release statistics in both systems considerably deviate from Poisson
processes. Moreover, we found that the inter-event interval histograms of the mEPSCs from
mice Hippocampal neurons are well described by inverse-Gaussian distributions, while the
inter-event interval histograms of mEJPs in the neuromuscular junctions of Drosophila larvae
are, in principle, well fitted by gamma distributions. We then developed a theory based on
the concept of first passage time (or first arrival time). By realizing that the electrophysiological experiments (both amperometry and patch-clamp) actually measure the first passage times and by confirming that the inverse-Gaussian distribution is the first passage time of
the Fokker-Planck equation with constant velocity drift, we then postulate that the dynamics
of the ensemble of synaptic vesicles can be fully described by the Fokker-Plank equation
with constant drift. Having this in mind we took a more careful look at the mEJP data and
found that they can be better fitted by a superposition of two series following inverse-gaussian
distributions, instead of a single gamma distribution. Since the neuromuscular junctions
of Drosophila larvae are characterized by two active zones with different areas, this could
explain why a superposition of two series yields a better fit to the experimental data, and one could also draw the conclusion that the motion of synaptic vesicles shows a universal behavior independent of the organism.