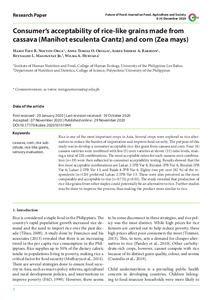 Rice is one of the most important crops in Asia. There are several crops that can be utilized as an alternative to rice. This can help reduce the burden of rice importation and improve food security. The purpose of this study was to develop a consumer acceptable rice-like grains from cassava and corn. A total of 220 combinations of rice-like grains from different cultivars of cassava (Binulak, Lakan 1, Lakan 2, Rajah 4) and corn (IPB Var 6, IPB Var 8, IPB Var 11, IPB Var 13) were developed. Most acceptable combinations were then subjected to consumer acceptability testing. Results showed that the five most acceptable combinations are Lakan 2-IPB Var 8, Binulak-IPB Var 8, Binulak-IPB Var 6, Lakan 2-IPB Var 13, and Rajah 4-IPB Var 6. Eighty two percent (82 %) of the respondents preferred Lakan 2-IPB Var 13 from among all the 20 combinations. These were also perceived as the most comparable and acceptable to rice (r=0.753; p<0.01). The study revealed that production of rice-like grains from other staples can potentially be an alternative to rice. Further studies may be done to improve the process thus making the product more similar to rice.